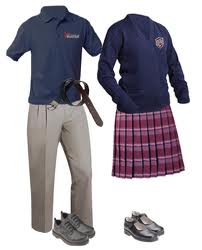 توافر
تحديد السعر من البائع
البائع
القاضى جروب
مصر, ﻿القاهرة
(المكان على الخريطة)
+20(
عرض الهواتف
الاتصال
منتجات شركات أخرى
الخصائص التقنية
وصف
A school uniform is an outfit—a set of standardized clothes—worn primarily for an educational institution. They are common in primary and secondary schools in various countries (see list of countries below). When used, they form the basis of a school's dress code. Traditionally school uniforms have been largely subdued and professional.[citation needed] Boys' uniforms often consist of dark short or long trousers and light-colored shirt, often with a tie. Girls' uniforms vary greatly between countries and schooling systems, but typically consist of a dress or a blouse worn either with a skirt or culottes or under a pinafore; some countries allow girls to wear trousers. The use of a blazer or suit-like jacket for either gender is also fairly common, especially in countries with relatively cold weather. While some countries have school uniforms that are essentially standard in all schools using it, others have each school with an individual uniform, varying in and often making use of badges.
الاتصال بالبائع
School uniform