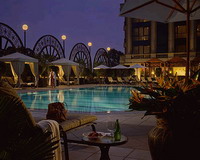 The topography of Cairo is dominated by rivers, deserts and plateau. Biggest part of Cairo is on the East Bank of Nile. Top tourist attractions like The Pyramids and the Sphinx are on the West Bank. Zamalek is a small residential island on the Nile. The Gezira Club occupies greater part of the island and the famous Opera House is also located on this island. The fascinating Mu'qutum Hills lie to the east of Cairo. It is a great place to spend a relaxed evening.

Cairo downtown is a wonderful place. Cairo downtown is the planned section. The orientation of downtown Cairo is built on the model of Paris. This part of the city is characterized by contemporary architecture. It is the commercial center of the capital city. Small and big hotels, various retail outlets, travel agencies and restaurants are found in this part of the city. The downtown Cairo lies to the east and north east of Midan Tahrir. Wide and well maintained thorough fares and boulevards are common here. The main thorough fares are Sharia Talaat Harb and Sharia Qasr el Nil.